Home » The Difference Between Earned Income vs Passive Income

Knowing the difference between earned income and passive income can set you ahead of the crowd.

Wouldn’t you like to learn how financial education can help boost your chances at becoming more skilled at wealth creation?

Check out these books on personal finances to help advance your financial education.

You may be shocked to find that many don’t understand fully the differences between the two incomes.

There are people that say they do but if they truly understood they would work to create more passive income verses earned income. In the article you will learn the difference between the two incomes and what to do next.

Earned income is money that can be made through wages as an employee or business revenue as a business owner.

The IRS has a tax bracket and is updated to reflect how much a wage earner has to pay in taxes.

Below, as of the time this article was written, the tax bracket ranges from the IRS. IRS Tax Bracket Breakdown by Income for Single and married people.

When you are an employee and work for wages depending on your income for the year you will have to pay taxes on the percentage required from the IRS.

So, for example if you make $45,000 as a single person then your tax rate would be 22%. There was not always an income tax for earned income.

The government can adjust tax rates.

It is beneficial to know at least the basic understanding of how personal income tax works so when you file your own taxes you can be more confident about the accuracy of the taxes you are paying on.

In the below chart, sourced from the Congressional Budget Office, depicts estimated forecast for individual and payroll taxes up to the year 2028. 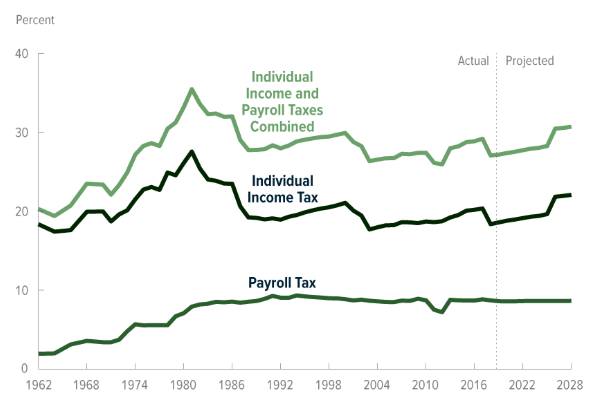 This is just a projection but individual income tax is expected to rise within the next decade.  Income tax is a tax on wages or salary primarily from federal, state and local taxes on net income.

Payroll tax is a tax from wages and salary that fund social welfare programs.

As a person or business owner it is important to know the differences in earned and passive income so as you channel money into investments you know what income to work for.

Step 1: Discover where all of your income streams comes from

This type of income refers to income generated with little or no work. Examples of passive income are rental property income, royalties, and “No material participation” in business revenue.

Assets are items that are income-producing and some assets can produce passive income. If you buy a rental unit then find a tenant who pays you more then the cost of monthly expenses then you make income that is considered passive.

If a person creates a book and has a agreement with a book publisher for a percentage of the sales this is another examples of passive income.

When a professional investor provides capital, $300,000 for 30% of business revenue, to a business partner and is not actively involved in operations receives passive income.

A major difference in passive income compared to earned income is that passive income has more flexibility in tax treatment and generally lower tax liability.

If an investor has a real estate property that generates $50,000 in passive income they can use a 1031 exchange to legally defer taxes and then buy another property.

A employee who has $50,000 in earned income will pay around 22% tax which is about $11,000. Another example is that a rental unit can be depreciated so that the overall tax liability is reduced and there is more cash left over.

To find out how to retire young read this article.

Step 1: Identify what passive income streams you are interested in

Step 2: Choice and focus on acquiring one passive income stream at a time before moving to the next

Step 3: Set a goal and plans on paper to acquire your passive income stream of choice

If you have found this information helpful check out more free resources and information to help you master your finances here.