If anyone thought the recession (economic slowdown) in the US which orchestrated itself due to the credit crunch is past and the US economy is looking up, think again.

As many as 142 banks in the US have failed already this year, beating the total number of 140 bank collapses last year when the economic turmoil was at its peak

This does suggest that the financial woes of the world’s largest economy is still very much in tatters despite the gradual improvement in the performance of  US Stock Markets. 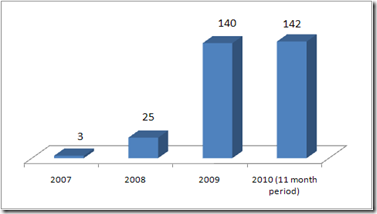 Coming to the bank failures, the collapse of banks has been consistent all through the year with April accounting for maximum failures at 23. August saw 10 banking entities go down, September had 7 banks going belly up and as many as 12 banks collapsed in October. Even though November has only just begin, it has seen the closure of 4 new banks in 3 different locations (California, Maryland and Washington) and thereby surpassing the number of bank failures in 2009.

The increasing number of bank failures in the US continue to paint a grim face of the current economic situation and the near term future does not look bright too. As for the direct monetary losses, the latest failures alone are expected to cost more than $254 Mn

(Source: Wikipedia, last two bank names from other source)
Phew! Some list this is turning out to be. The list contains banks of all sizes (based on assets) signifying that it is not the small ones that are probably falling out due to liquidity crunch, even the large ones have found it impossible to sustain and have fallen flat. The total assets maintained by these 142 failed banks account total $92,159 Mn  *Gasp* (excluding the last two for which data was not available)
Not to sound pessimistic but if the banks in the US keep falling at the current pace, leave aside Economic recovering it might signal another recession in the making which no one can afford at this stage.
What are your thoughts on this increasing list of bank failures in the US? Is there any positive signs in the near future which could possibly stall the rising number of bank failures or the credit crunch in 2009 will continue to bleed the banking institutions